There was more to R.C. Mudge than just making paper garments.  He enjoyed music, acting, and giving to those less fortunate than himself.  In 1889, he printed a piece of piano sheet music titled “The Paper Vest Gallop” composed by J.E. Fancher from the sulphite paper used to make his paper garments.  He gave out free copies to anyone in the Port Huron community who requested one.  At the time, the cost of a piece of sheet music was 50 cents.  Today, that would equate to $12.50.  The sheet music survives and is part of the Lester S. Levy Sheet Music Collection at the John Hopkins Sheridan Libraries & University Museums archive.  In addition to printing off and giving out free music, Mudge was praised many times by the Port Huron community for donating paper blankets to the Port Huron Hospital and Home Association and paper vests to local mail carriers. 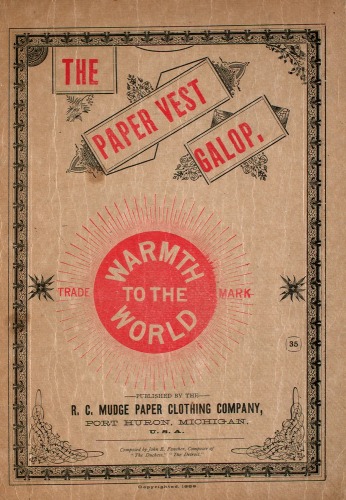 Before R.C. Mudge started making paper garments, he performed briefly on the vaudeville stage.  He gave up acting when he and his wife, Delphine, had their daughter, Generva Delphine, who went by the name Eva.  Little Eva Mudge shared her father’s artistic inclination and love of music.

In 1890, R.C. Mudge sold his interest in the paper garment business to Henry McMorran and Wilbur Davidson.  Together, they reorganized the company under the name The Port Huron Paper Clothing Company.  The factory was moved from Butler Street to the Benedict Block on Military Street.   Sometime in 1891, Mudge left Port Huron and moved to Brooklyn, New York.  By 1893, little Eva Mudge was on her way to becoming a child actress dancing and singing her way into the hearts of New York theater goers.

In 1895, Eva Mudge made her debut on the national stage alongside Sadie Hasson, a very well-known theater actress at the time.  Sadie was best known for her theatrical partnership and marriage to actor, Joseph J. Dowling.  By the time Sadie shared the stage with Eva, she was newly divorced from Mr. Dowling and nearing the end of her acting career.  She retired in 1901 and settled in Mount Clemens, Michigan, until her death in 1937.

Advertising brochure for Nobody’s Claim, circa 1880

Eva ended up catching the eye of Buffalo Bill Cody and she was asked to play a small role in his Wild West Show.  She made instant friends with Walter E. Scott, aka Death Valley Scotty, who shot an apple off the top of her head in the show.  I estimate she traveled off and on with Buffalo Bill between the years 1894 to 1900.  I managed to find a photograph of this Woodland’s beaded deer skin jacket once owned by R.C. Mudge.  On the inside collar is a handwritten inscription that reads “Presented to R.C. Mudge, W.F. Cody, October 20, 1894.” 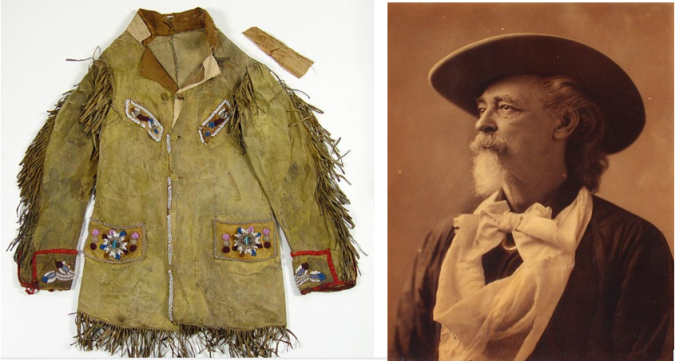 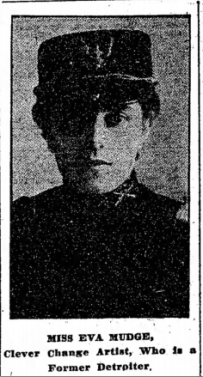 Eva Mudge became a popular vaudeville star in the early 1900’s with her quick change act, “The Military Maid“.    During her performance she would change into various costumes to include a nurse, sailor, a confederate solider and Stonewall Jackson.  She mesmerized audiences nationally and internationally in this role and she became known as the fastest quick change artist on vaudeville.  In her later years, when asked about the mechanics of her quick change secret, she disclosed she had two dressers who could pull a string on the back of her costume that would instantaneously make it fall off. 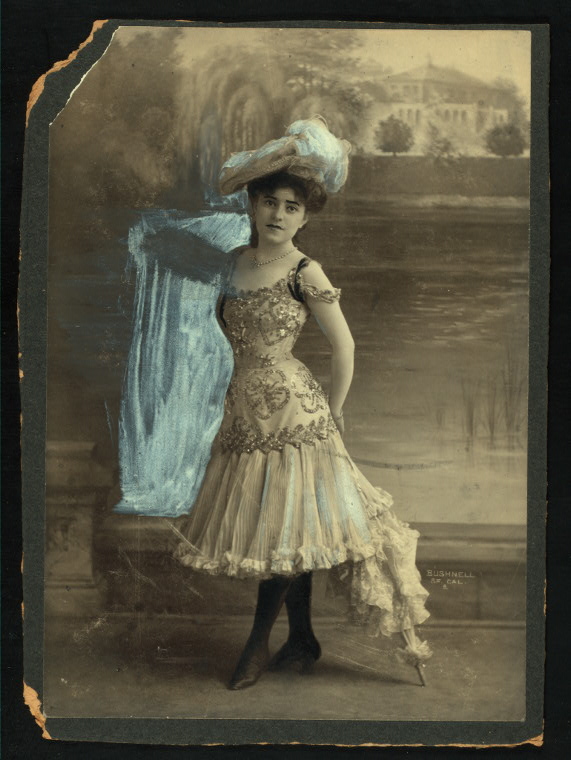 R.C. Mudge acted as Eva’s stage manager during her vaudeville years.  This role led him to form a talent agency in partnership with C.G. Prouty where he managed other vaudeville stars.  Mudge was also active in The White Rats and served as their acting President in 1906.  The White Rats was an actors labor organization, which began in 1900 to combat the Vaudeville Manager’s Association and the United Booking Office dominance over the profession.  At the time, these two organizations held enormous control over the wages of performers.

At the same time that R.C. Mudge was busy managing his daughter’s career, he also held  interest in the automobile industry.  This time his tinkering mind managed to produce a flue construction patent (patent number 658.114) for steam carriages for the Locomotive Company of America.    The Locomotive Company of America started manufacturing steam carriages out of Bridgeport, Connecticut in 1900.

Later in her acting career, Eva would make the transition to film with parts in a Louis Mayer production, The Famous Mrs. Fair (1923) and Night Song (1947).  Eva married Sanford Nelson and her daughter, Ruth Gloria Nelson, was born in 1905. 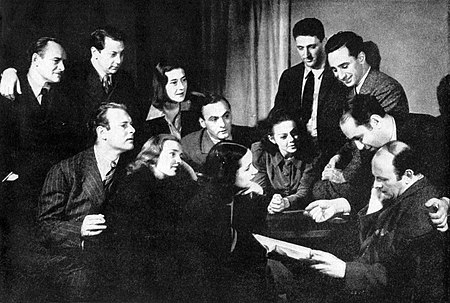 Ruth Nelson would go on to become an actress and an original member of the Group Theatre in New York alongside Elia Kazan.   She would star in his film The Sea of Grass (1947).  Ruth made many films for various Hollywood studios.  However, she took a long hiatus from acting when her husband director, John Cromwell, was blacklisted in 1951 by the House Un-American Activities Committee.  Ruth stood by her husband during this period turning down the opportunity to star in the stage production of Death of a Salesman.

The Mudge family certainly led a colorful life.  Originating in Detroit, they passed through Port Huron, New York City, and Hollywood each of them molding their lives by use of creative talent.  When I jumped into the world of Henry McMorran, I never imagined I would unlock such rich stories about people like the Mudge family.  Every day, I am learning the life of one touches many and personal history research is full of little twists and turns on an interconnected highway.

Among Agents and Producers (October 31, 1908).  The New York Dramatic Mirror.

Thinking Out Loud in the Blogosphere

Sharing Personal History One Life at a Time

Sharing Personal History One Life at a Time

If you want to be a hero well just follow me

The life of a dreamer.

A daily selection of the best content published on WordPress, collected for you by humans who love to read.

weekly conversations on the world of telling true stories, by Proximity

Celebrating archives and heritage organizations in the Portland metro area

Making genealogy more intersectional and accessible to all

Genealogy..a journey to the past present and future.

Pigs and Chickens will Make Shore

(Somewhat) Daily News from the World of Literary Nonfiction